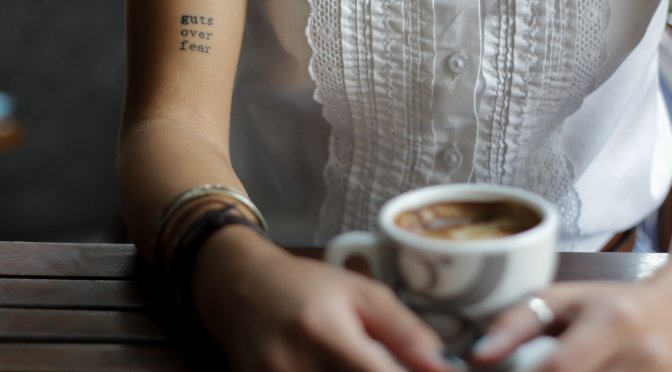 If there is one thing I’ve learned over the years, it’s this: leadership isn’t for the faint-hearted. Look around, and you’ll see the ravages of an unrelenting war on character, relationships, reputation, knowledge, and foresight.  Amazon lists more than 200,000 titles on leadership that cover the gamut from casting vision to building high-capacity teams and designing organizations that stand the test of time. Most are bullish on courage and fortitude in leadership, and all are quick to list tips on being more effective, more charismatic, more relevant, and more dynamic. We’re told to be bold – always. We’re given powerful quotes like this one from Nelson Mandela:

I learned that courage was not the absence of fear, but the triumph over it. The brave man is not he who does not feel afraid, but he who conquers that fear.

When it comes to leadership, fear is equated with weakness. And weakness is not the most popular topic over a cup of coffee or in a boardroom. But here’s the truth about fear: it exists, even in the lives of highly successful leaders. At some point, we quietly wonder how we would be perceived if we confessed that we’re afraid of being ineffective or inadequate. We wonder if our own credibility would be dashed if we admitted that we battle comparison and jealousy. We wonder if we might disqualify ourselves if we come clean about the struggles that still get the best of us or the answers that still elude us.

And so, the temptation will be to tuck away those fears, or speak about them to our employees, our congregations, and our peers as something we used to fight “before we triumphed.” But while it may make for a compelling and motivating battlefield message, if we’re honest with ourselves, we’ll continue to fight fear in the trenches. It may not rage as often, but fear will never completely disappear.

And what if it’s not mean to go away entirely? Is fear truly the enemy of good leadership? Or is there a greater purpose to fear? Could fear make us more authentic leaders? I believe fear has the power to do three very positive things in our lives – and I think it’s time to face that fear with a fresh perspective.

Authentic leadership needs a good, healthy dose of fear to keep it truthful, faithful, and responsive.

“Ultimately we know deeply that the other side of every fear is freedom.” ~Mary Ferguson.

While the fears that do battle in our minds may not be founded in truth, what they can reveal about us can be telling. Authentic leaders don’t shy away from asking, “Why does this fear exist in the first place?”  Rather than fighting it or denying it, we lead well when we let first let fear uncover areas in our own lives that need to be refined, thoughts that need to be transformed, and faith that needs a boost.

Fear builds storylines based on what surrounds us, but those storylines don’t have to define us. We discover the tender touchpoints in our lives when we seek the truth about our response to fear. And we discover the depths of God’s provision when we then give the storylines to God and embrace His faithful response to them.

Don’t panic. I’m with you.
There’s no need to fear for I’m your God.
I’ll give you strength. I’ll help you.
I’ll hold you steady, keep a firm grip on you.

Reggie Joiner, Founder and CEO of the ReThink Group, says, “Kids don’t what a lecture on what you know. They want to experience Who you know.” I believe the same holds true for adults too. People want leaders who are willing to be in the trenches.

When we confess that we are still on the battlefield, those we serve get to see us fighting the good fight of a faith that keeps persisting.

One of the best things about fear is that it requires a response from us. And if we are leaders, those around us are watching to see what ours will be.

We strip fear of power when we demonstrate that God can use that fear to reveal His purpose and power in and through us. When we allow faith to uncover truth and reveal faith, we can walk with others as we lead them, standing shoulder-to-shoulder. We gain strength. Those with us gain strength too.

Take a moment and ask yourself these two questions:

What are the things I fear most right now about my present (or my future)? Be honest.

Rather than deny or fight that fear, what might I do to face that fear and respond to it in truth and faith?