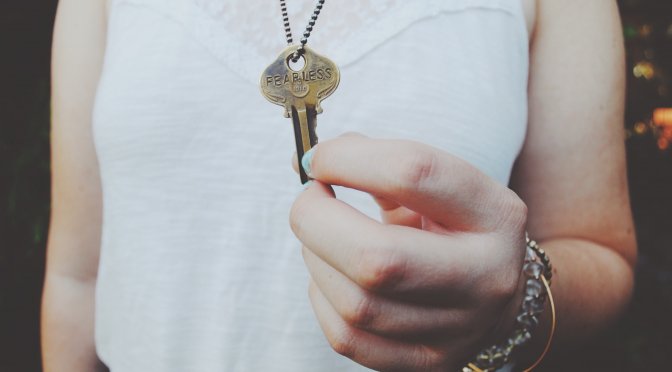 I remember watching an old movie called “The Ten Commandments” as a kid. Though the special effects would likely be laughable these days, my first-grade mind was amazed (and a little freaked out) as locusts darkened the skies and big tornadoes of fire kept the bad guys at bay. Moses seemed like the ultimate superhero in that movie, so brave and strong when he pointed a big stick to a raging Red Sea (made of gelatin and water) and said in his deep and powerful Hollywood voice, “Behold, His mighty hand!” as the waters parted to let the children of Israel escape harm.

And it’s THAT Moses who’s my superhero these days, because he reminds me why you and I need to do things that scare the bejeebers out of us. I’ve written before about the value of fear in our lives when it comes to being great leaders. Fear reveals truth, uncovers faith, and prompts response in how you manage people and circumstances. Facing fears (and teaching others to face them) helps you lead with greater strength.

In my 20s, I looked at fear as a thing to be avoided. I wanted every risk to be well-calculated, and every move to have a high degree of success attached to it.

It wasn’t until decades later that I learned that facing fears is powerful – and the most powerful fear to face is the fear of failure.

I’ve got a pretty big list of dreams now, but none is bigger than this one:

To publish a book – and produce a documentary series based on the women featured in the chapters – that will help transform lives in communities around the world. And for THAT to transform culture.

Yes, I write. Yes, I have a background in video production. Yes, I work for a global nonprofit that helps transform lives. But this dream terrifies me because it’s so undone. There is no talent that is refined enough, no connection that is strong enough, no pockets that are deep enough. And even though I am taking one small step after another small step toward bringing the dream to life, I feel completely inadequate to make it a reality. I hear myself whisper the damning words, “I will surely fail.”

Thank goodness there’s Moses. As a shepherd, he had carefully crafted a staff – a beautiful piece of wood that served as defender and disciplinarian for the herd he carefully tended. He knew how to protect and he knew how to serve, he knew the importance of the nightwatch and knew the right places to lead his flock to be fed and watered. He was careful and he was wise.

He carried the staff with him as he worked, protecting and then prodding the herds of sheep he watched over day after day. One day, God showed up with a huge opportunity to lead His people out of Egypt, where they had been enslaved and abused. And Moses promptly responded with, “I think you’ve got the wrong guy.” Fear of failure threatened to overwhelm him. But in the midst of that fear, Moses did three things. Those three things are great challenges for you and me.

1. GO FOR THE JOB THAT’S ABOVE YOUR PAYGRADE.

Moses answered God, “But why me? What makes you think that I could ever go to Pharaoh and lead the children of Israel out of Egypt?” God responded, ‘I’ll be with you.” (Exodus 4)

And God said, “Take the risk.”

2. GO FOR THE TASK THAT WILL STRETCH YOUR SKILLS.

Moses raised another objection to God: “Master, please, I don’t talk well. I’ve never been good with words, neither before nor after you spoke to me. I stutter and stammer.” God said, “And who do you think made the human mouth? And who makes some mute, some deaf, some sighted, some blind? Isn’t it I, God? So, get going. I’ll be right there with you—with your mouth! I’ll be right there to teach you what to say.”

For Moses, it was about speaking in public. For me, it’s about finding an audience. Fear of failure often points directly to the things we believe are our weakest links. It’s OK to acknowledge both your strengths and your weaknesses, but fear wins when you decide those weaknesses have the final say in your potential. Going for the task that stretches your skills will do one of two things:

Moses learned to speak with authority despite the stutter. And God paired Moses with his brother Aaron, a trusted friend who helped him lead even in the most difficult seasons when it would have been easier to quit than to move forward. Dale Carnegie says, “Inaction breeds doubt and fear. Action breeds confidence and courage. If you want to conquer fear, do not sit home and think about it. Go out and get busy.” Facing his fears, Moses got busy.

3. GO FOR THE GOAL THAT’S OUTSIDE YOUR COMFORT ZONE.

God said to Moses: “Why cry out to me? Speak to the Israelites. Order them to get moving. Hold your staff high and stretch your hand out over the sea: Split the sea! The Israelites will walk through the sea on dry ground.” (Exodus 14)

Of all the things God could have done to equip Moses for the task of leading, He chose a staff – the same staff Moses had been using to herd sheep. It was if He was saying, “I’m not asking you to change, Moses. I’m just asking you to step outside your comfort zone.”

Now, in that movie I watched as a kid, Moses was tall and powerful with lots of flowing silver hair and a booming voice. I’m thinking Moses in real life was holding on to that staff with all that was in him to keep it from shaking as he held it out to tell the water to part. He has seen God come through time and time again, but I can’t help but wonder if he quietly whispered, “Please don’t let me down now…” as he made his bold move.

For you, stepping outside that comfort zone may not be splitting a sea with a stick. But it might be taking a risk on a new career, or putting your thoughts on paper for others to read, or diving into a ministry endeavor. The fear of failure can keep you away from some of the most powerful moments of your life. I wish someone would have told me that at 25. I’m glad to know that now.

“I really don’t think life is about the I-could-have-beens. Life is only about the I-tried-to-do. I don’t mind the failure but I can’t imagine that I’d forgive myself if I didn’t try.” – Nikki Giovanni

You Need to be the Welcome Mat

When You Know It’s Time For A Change